Peggy Kasprowicz’s patient and positive mindset made her the natural choice for the role of change agent, helping to bring the former UAS Labs and Chr. Hansen together

Peggy became a Hansenite in June 2020 when Chr. Hansen acquired UAS Labs, where she had worked since June 2013. In addition to her role as Receiving Lead, Peggy has played an instrumental role as change agent during the integration process.

Excited about the future

Although the acquisition was a big change that fostered a lot of emotions for UAS Labs’ 230 employees, Peggy quickly became more comfortable and excited about the future: “We were definitely entering the unknown, so you can’t help but speculate as to what could happen – are we going to lose our jobs? Are they going to move us to a different location? So many questions. But after our first virtual townhall meeting with CEO Mauricio Graber and the leaders in Denmark, I could feel their excitement and understood how we could be stronger together.”

“…the upper management was listening to even what seemed the smallest issue and were willing to help and make our workday better.”

Peggy was soon invited to be part of a team of employees to bring up any concerns their colleagues had on the transition to Chr. Hansen: “We discussed how we could communicate to get answers to everyone involved. Our goal was to make a culture that was proactive, honest, open to change and create transparency by explaining why we do what we do. All team members really felt appreciated for our involvement. We felt that the upper management was listening to even what seemed the smallest issue and were willing to help and make our workday better.”

The best of both companies

Since the acquisition, focus has been on maintaining the “best of both worlds” from UAS Labs and Chr. Hansen. Peggy highlights knowledge and commitment as part of UAS Lab’s strengths: “At UAS we have lots of knowledgeable people to make new and better probiotics. This is all we do, and when you do one thing you become a master at it! We also love to share that information with others, and we are willing to learn better ways from Chr. Hansen. We have a lot of people committed to doing the best job they can and teaching that culture to new co-workers!”

“Being part of this global company, we have learned more about respecting different cultures, and diversity and inclusion.”

As for the core strength of Chr. Hansen, Peggy emphasizes that, “Chr. Hansen is committed to sustainability and paves the way for others to follow, and you do not see that in the average business world. The internal communication on a global scale is also very good. The best is the people though: we have gotten so much support and help from especially the other plants in Wisconsin. Everyone is so nice and willing to help. Meeting them all has been such a pleasure.”

A purpose-driven approach to working

Becoming part of Chr. Hansen’s global workforce has given the former UAS employees a more purpose-driven approach to their work: “Being a Hansenite means that we are helping people all over the world live a healthier life by providing high quality products while being sustainable – and that’s a great reason to go to work every day. Being part of this global company, we have learned more about respecting different cultures, and diversity and inclusion.”

“…even though we are now part of a large organization, I really feel that we are seen and heard, and that our opinions are respected.”

According to Peggy, feeling seen, heard and respected is important in becoming a Hansenite: “Coming from this tiny probiotics company, to becoming part of global Chr. Hansen has boosted our ego a little bit! It makes a big difference how you’re treated by management, and even though we are now part of a large organization, I really feel that we are seen and heard, and that our opinions are respected.”

Be patient when it comes to change

Peggy’s advice to others going through a change is to have patience: “I still hear people – often new people – spotting flaws or finding things that can be improved. That’s great, and I encourage people to share great ideas, but you also have to be patient when it comes to change. It’s important to look at the big picture. We often worry about how change affects us, but the key is to understand why the change is happening. I really encourage everyone to do that – it will help you on your change journey.”

Meet our colleague Sten Holmgaard Soerensen, who works as a Senior Technician in Fresh Dairy Tech...

Imre Danel has been a warehouse operator trainee at Chr. Hansen’s Copenhagen production site since...

Working in a global workplace

Furqan Ali is a biotechnologist working from the Pune Technology Lab in India. He joined Chr.... 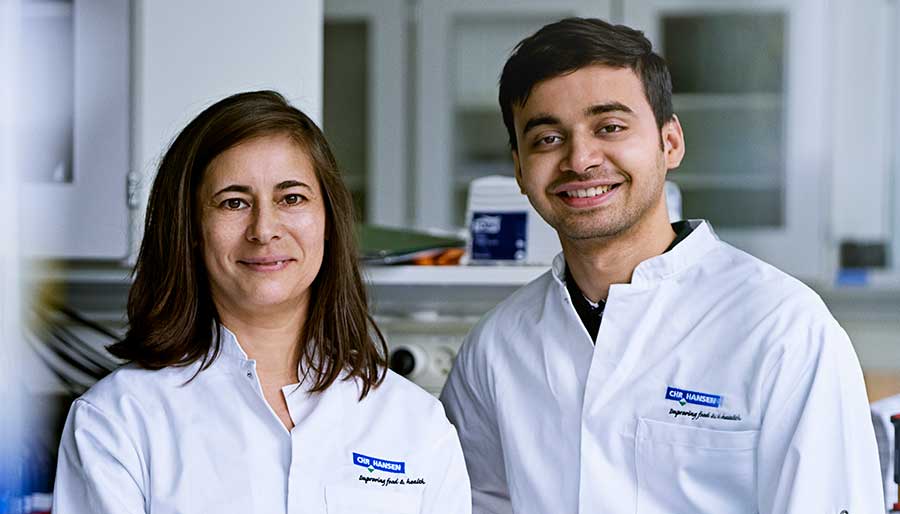