The following is a summary abridged from the white paper "Use of bacteria from the genus Bacillus in agriculture" by Niels Bohse Hendriksen, Senior Scientist, Department of Environmental Science, Aarhus University, Denmark.

As the global population continues to grow, the agricultural sector faces the challenge of increasing crop production while simultaneously improving resource use efficiency and reducing the environmental impact of farming.

The use of natural plant-stimulating microorganisms is one promising and environmental-friendly way of meeting these challenges. These microorganisms, which include viruses, bacteria and fungi, enhance flowering, plant growth, crop productivity and nutrient use efficiency and are able to improve tolerance against a wide range of abiotic and biotic stresses.

Abundant and diverse
Bacteria are microscopic organisms found everywhere on earth and in every type of environment. They are extremely abundant in agricultural fields (with often more than ten billion per gram of soil) and are very diverse consisting of thousands of species.

The rhizosphere, including the root surface and the soil closest to the roots, also harbors numerous bacteria from diverse bacterial groups. Because they can produce hormones that spur growth, stimulate the plant immune system and trigger or dampen stress responses, bacteria play a vital role in the mineralization and fixation of nutrients for plant growth and thus influencing growth and productivity.

During the last one hundred years, bacteria have been used in agriculture as biopesticides and biostimulants for protecting plants against pests and diseases as well as stimulating plant growth. But their importance has grown during the last twenty years as the challenges caused by the use of chemical pesticides and fertilizers have increased.

The first species of Bacillus subtilis was identified in 1872, and today the genus contains approximately 300 identified species – varying from the pathogenic Bacillus anthracis (the causative agent of anthrax) to bacteria that are vital to the industrial production of antibiotics and enzymes, human probiotics and biopesticides, biostimulants and feed additives.

Bacilli are one of the predominant culturable soil bacteria, where they often constitute 106 to 108 bacteria per gram of soil. Most Bacillus found in soil are present as endospores, structures that can survive for many years and various types of stress such as desiccation, starvation, high temperatures, and acidic conditions. Bacillus is also found in crops, where they can be isolated from leaves as epiphytes, the rhizosphere of the roots or even as endophytes within the plants.

Bacillus-based biologicals
B. thuringiensis, first isolated from infected silkworms in Japan in 1901, formed the basis of the first successful biopesticides. Experimental uses of the bacterium for the protection of vegetables from lepidopteran larvae began in the late 1920's in a number of countries and the first product appeared ten years later in France.

However further development of products based on B. thuringiensis were halted by the discovery of DDT and the outbreak of world War II. Commercial interest in such products later grew rapidly when it became apparent that some chemical pesticides were harming the environment. In contrast, few detrimental effects of B. thuringiensis on the environment have been observed or recorded and it is still widely used today.

Environmental exposure
Studies show that Bacillus applied to crops survive for a relatively short period (rarely more than a month) with the largest decrease in numbers occurring during the first two weeks after application. This rapid decrease means that the application of the Bacillus sometimes has to be repeated to maintain protection. In the rhizosphere, applied bacteria often proliferate and then decrease in numbers during ripening and after crop harvest.

Survival is much higher in soil, with approximately ten percent of applied bacteria surviving for a year; some have even survived after 13 years. In this context, it is important to note that survival of the Bacillus does not constitute a hazard per se, as they are already present in the environment.

Microorganisms used in agriculture are most likely to be in contact with humans as residues on crops consumed for food, and it is therefore important that they do not cause disease. Most Bacillus species are non-pathogenic with only some species within the B. cereus group considered to be pathogenic; it is quite easy to differentiate between non-pathogenic and pathogenic Bacillus species.

Authorization and regulation
The use of biopesticides in Europe is regulated by the EU but the authorization of microorganisms for pest control and biostimulants in the EU has long been considered as inefficient and slow compared to other countries.  According to EU's "Farm to Fork" strategy from 2020, the European Commission will take additional action to reduce the overall use and risk of chemical pesticides by 50% by 2030 and this will hopefully speed up the approval process and ensure that it has a stronger rooting in fundamental microbiological science.

About the author
Niels Bohse Hendriksen, Senior Scientist, Department of Environmental Science, Aarhus University has forty years of experience in research and science-based advice in relation to microbial pest control agents. His research experience is within soil biology and includes work on the biology of bacteria from the genus Bacillus. He has advised the Danish Environmental Protection Agency (EPA), the Danish Agricultural Agency, the Nordic Council, the European Food Safety Authority, OECD and WHO. 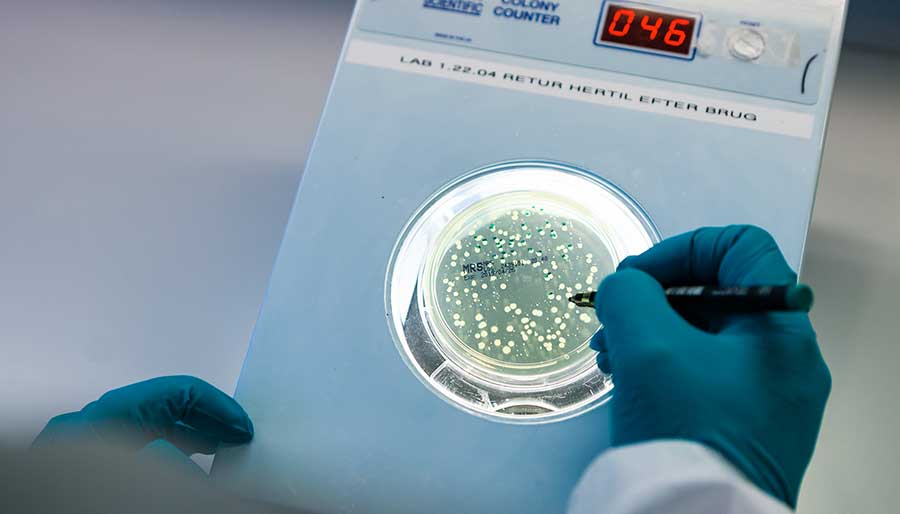 Use of bacteria from the genus Bacillus in agriculture