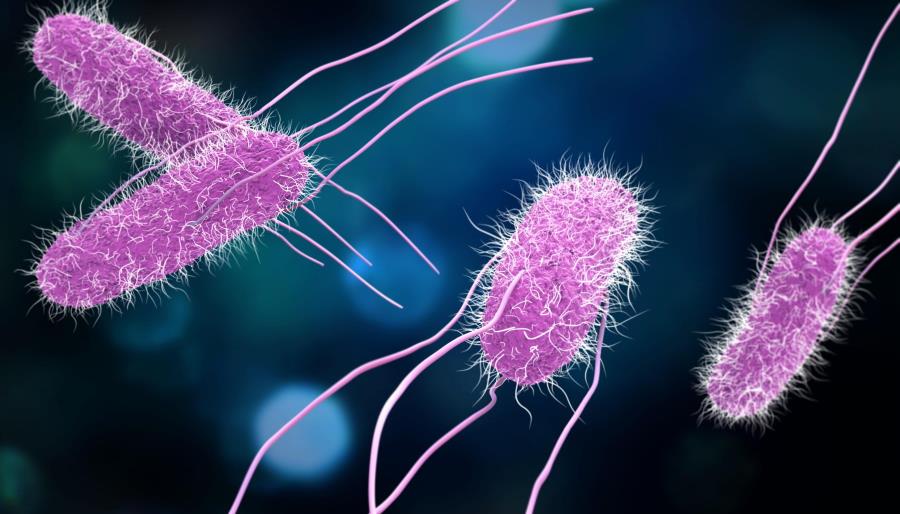 Human illness due to Salmonella continue to be reported globally. Many cases are associated with the consumption of contaminated poultry meat. An issue involving the Salmonella contamination of broiler meat recently surfaced in Brazil. This has had a devastating effect on the country’s export market. In the second part of 2018, the EU announced a ban on the importation of broiler meat from 20 Brazilian plants. In the United States, human outbreaks of Salmonella associated with the consumption of raw turkey products have surfaced during late 2018 and early 2019. Over 200 people are reported to have been affected. Approximately 110,000 kg of raw turkey meat has been recalled due to potential contamination of several different raw turkey product lines. This costed  turkey producers up to 1,000,000 $.

The contamination of broiler or turkey meat by Salmonella has several potential entry points. Salmonella strains are known to colonize the intestinal tract and internal organs like the liver.  Salmonella Typhimurium, S. Enteritidis and S. Heidelberg are three of the most prevalent serovars historically implicated in human food poisoning events. Most often these strains do not cause disease in poultry. Yet humans can be severely affected with disease if these bacteria are consumed. The source of the Salmonella in raw meat products can often be linked to contamination of the product during the processing of the carcasses. In order to reduce the potential of Salmonella contamination of meat products, it is essential to reduce both the number of birds carrying Salmonella in their intestinal tract as well as the amount of Salmonella present. This two-fold intervention strategy has proven to reduce product contamination as well as decrease potential internal organ infection.

The reduction of Salmonella contamination in egg products is equally important. Several outbreaks of Salmonella illness in humans have recently been reported in Australia after the consumption of eggs. Twenty-eight cases of Salmonella Enteritidis were reported throughout Australia in September 2018. A most recent outbreak in March 2019 has affected an undetermined number of people. A Salmonella Braenderup outbreak associated with the consumption of shell eggs in the United States resulted in illness of 45 people and over 17 million dozen eggs being recalled.

Since the 1980s the global commercial egg industry has been on the vanguard against SE (Salmonella Enteritidis) contamination of table eggs. Many interventions have been used to mitigate the possibility of SE contaminating eggs for human consumption. A well-researched, food safety intervention in broilers is the use of feed additive probiotics. Less is known of live production intervention strategies in commercial hens. Here are only a couple possible modes of entry of SE in commercial laying eggs. The first is direct contamination of the egg shell during the egg laying event. It is proposed that the SE penetrate from the exterior into the internal components of the egg during the cooling of the egg. The second route of entry is direct contamination of the egg albumin or yolk from an infected ovary. Both modes of contamination involve the intestinal tract. This would indicate that a reduction in the populations of Salmonella in the intestinal tract would directly result in reduced risk of transmission into consumable eggs.
The purpose of the below study is to investigate the use of GALLIPRO® FIT probiotic as food safety intervention.

The Research Trial:  Creating Real-life Scenarios in a Controlled Environment

Recently Chr. Hansen investigated the effect of the dietary use of GALLIPRO® FIT and resulting SE colonization of the intestinal tract, most specifically colonization of the ceca, where the highest concentration of Salmonella is thought to harbor. GALLIPRO® FIT is the selected triple strain poultry probiotic, to boost prevention programs and contribute to food safety, while delivering profitability.

It currently being commercially used in the United States, Australia and South Africa. The probiotic contains two unique Bacillus subtilis strains and a Bacillus amyloliquefaciens strain. The recommended inclusion rate is 500g per metric ton of feed.

The trial was conducted in the US at the Southern Poultry Research Group facilities using a robust 196 W-36 pullets. The birds were housed at 10 weeks-of-age, allowed to acclimate for one week. At 11 weeks, 98 of the birds were fed GALLIPRO® FIT at the 500g/ton equivalent level. The other 98 birds were fed the same ration formulation, only without the inclusion of GALLIPRO® FIT. Six weeks after the birds had continuously consumed the feeds, they were orally challenged with a high level of a nalidixic acid-resistant Salmonella Enteritidis.

It is proven that continuous consumption of the GALLIPRO® FIT would influence the intestinal microbiome, ultimately influencing the ability of the SE to colonize the intestine. That is why the The single dose of Salmonella
The reason for using a nalidixic acid-resistant SE is in order for bacterial  identification  using a selective growing environment. This will distinguish the ability of a “known” Salmonella to colonize the intestine after the prescribed amount of time. Finally, an oral challenge at 17 weeks-of-age was used to investigate the susceptibility of the pullets after experiencing the stress of sexual maturation.

One and two weeks after the oral challenge with the SE, cecal samples were harvested from a respective number of the study animals. Two types of analysis were performed. The presence or absence of the nalidixic acid-resistant Salmonella were determined from each cecal sample. An overall analysis of the population of nalidixic acid-resistant SE was also assessed. An analogy would be:  If a census were being conducted of a city, two sets of data are collected. 1. Whether a home is occupied or not. 2. How many people occupied each home. 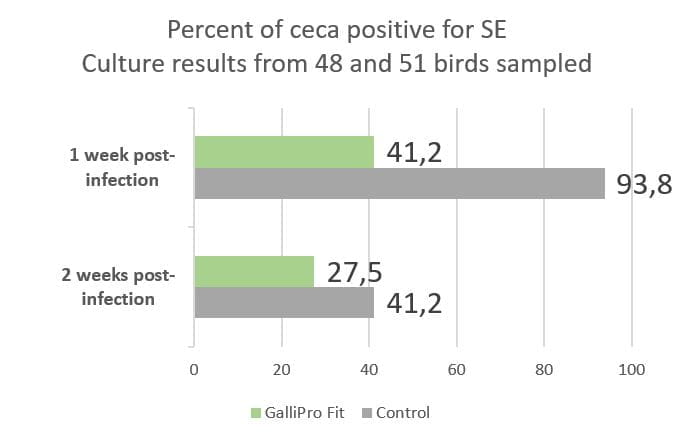 The results of the numerical populations of nalidixic acid-resistant SE in ceca positive for SE corresponded with the prevalence results. In birds known to be infected with SE, a significant reduction in the total number of SE colonizing the ceca was detected from those pullets receiving GALLIPRO® FIT in the diet. The numerical were determined by the proven microtiter MPN (most probable number) technique of quantifying bacteria.


The average population of SE found in the ceca from birds fed GALLIPRO® FIT was 7.76 SE bacteria per gram of ceca. The average population of SE found in the birds not fed GALLIPRO® FIT was 11.48 per gram ceca. These results are the culmination of all 98 birds sampled per treatment group. Although this reduction may look insignificant, the results are profound in that both aspects of SE colonization were reduced. Both the number of birds colonized by the bacteria and the actual number of SE were reduced in birds fed diets containing GALLIPRO® FIT.


The Caveat:  Fecal Shedding of SE

An additional analysis of the study was the utilization of boot sock swabs. These samples were obtained by an individual walking under the cages with boot sock swabs. Samples were obtained at 16 weeks-of-age just before the oral infection of SE. All boot samples were negative with that sampling. A second boot swab sampling was taken at 18 weeks-of-age. All 18-week samples were positive for Salmonella. This indicates the SE was being shed in feces and could serve as a source of the bacteria and possibly contaminate eggs.

Two major results were observed in this study.
1).  Less birds were colonized with Salmonella in the group receiving a diet containing GALLIPRO® FIT.
Analogy is that less houses were occupied

The presence of a 100% detection rate for Salmonella in the boot sock swabs indicate that the artificial challenge of the SE by oral inoculation sufficiently produced infection. That infection resulted in the contamination of fecal contents, which could ultimately provide a route of entry into the egg.

It is clear, the control of Salmonella during the live production phase is a multi-factor effort. There is no one intervention that will provide 100% protection against the bacteria. Each intervention builds on the other to create a stronger barrier against entry. In the seminal paper published in 1973 by Nurmi and Rantala in Nature, it was identified that the oral inoculation of young chicks with cecal contents from the mother hens, provided a reduction in the number of chicks susceptible to Salmonella colonization. That paper did not go the extra step in numbering the Salmonella of the intestinal tracts in those chicks.
The results of this trial support those early findings and build on the results by showing the additional reduction in cecal populations. All of which build on that barrier to prevent Salmonella contamination of food products.

GALLIPRO® FIT, has shown properties of inhibiting Salmonella growth in laboratory experiments. The purpose of this trial is to substantiate laboratory findings with live production results. .
With this in mind, GALLIPRO® FIT is a prefect natural mitigation tool toward food safety control programs involving pathogens like Salmonella.