Probiotics: a natural solution to Necrotic Enteritis in broilers

Necrotic Enteritis, a potential catastrophe for broiler production
Diseases often mean economic losses for broiler producers, especially when they go undetected for long periods of time. Necrotic Enteritis (NE) is among the most serious diseases affecting the broiler industry and a common driver of increased production costs. NE is a highly contagious infection of the gastrointestinal tract caused by the spore-forming pathogen Clostridium perfringens. This microorganism damages the intestinal epithelium, impairing villi functionality and architecture, which reduces their capacity to absorb nutrients. NE can be catastrophic for producers, especially in its sub-clinical form where the level of infection is mild and does not manifest obvious symptoms, thereby going undetected. Sub-clinical NE leads to a slow but steady growth rate reduction and food conversion ratio (FCR) increase, thereby causing a great economic loss for producers due to the lower body weight of broilers and an increase in feed and treatment costs. NE also poses a huge threat to public health as it can be transmitted to the food chain.

Probiotics for NE treatment and prevention
The use of antibiotic growth promoters (AGPs) used to be a standard practice in the broiler industry. Besides being used to increase weight gain in broiler chickens, AGPs also controlled the occurrence of NE. However, the decision to ban AGPs made in 2006 by the European Union ultimately led to NE outbreaks. Consequently, additional efforts have been undertaken to find new strategies to overcome NE.

Probiotics are naturally occurring, harmless bacteria that can be fed to animals to improve their gastrointestinal activity. By boosting digestive enzyme production, probiotics enhance nutrient absorption and, consequently, broiler growth rate. Probiotics modulate the intestinal microbiota and can effectively defeat several types of pathogens. A number of studies showed that supplementing probiotics to chickens reduced the toxicity of C. perfringens. In particular, the Bacillus licheniformis based probiotic GalliPro® Tect has been successfully used as an alternative to antibiotics for treating NE.
A zootechnical trial showed that supplementing broilers with GalliPro® Tect probiotic reduces the mortality rate of individuals exposed to C. perfringens by 20%. Moreover, this probiotic is suitable not only for treating NE but also as a disease preventive measure. Results from a second scientific trials showed a reduction of 30% in NE lesion score of vaccinated broilers after 21 days of supplementation with this probiotic. Because this immediate post-hatch period is a crucial time for the development of broiler’s intestinal tract, it is important to prevent NE during this critical period. The risk of NE can be further reduced if the protein blend S.E. is also supplemented in mash feed, as shown in a third scientific trial. Results showed that NE lesion scores decreased by 46% after 21 days of feed supplementation with GalliPro® Tect probiotic compared to the control treatment. Moreover, after 42 days of feed supplementation, NE lesion score further reduced to 82% (Figure 1). 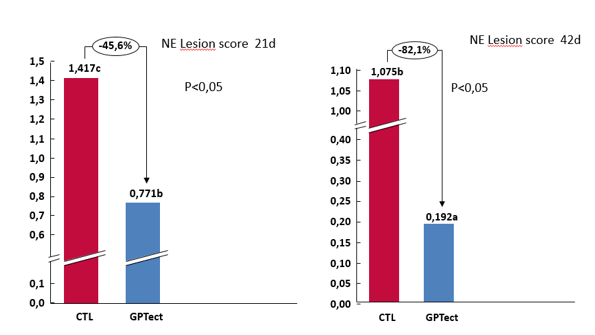 Figure 1. Results from a scientific trial where broilers were exposed to two treatments: a) Control treatment without supplementation, and b) feed supplemented with the probiotic GalliPro® Tect. NE lesion scores were assessed after 21 and 42 days

Benefits of Bacillus licheniformis-based probiotic
NE is a heavy burden on broiler production, causing economic damages of $2 billion every year. GalliPro® Tect probiotic is a natural feed supplement that can greatly decrease such economic losses by improving the gut microbial balance and the overall health of the gastrointestinal tract. It helps to defeat harmful pathogens like C. perfringens and overcome NE, which consequently leads to higher production efficiency, improved animal health, and reduced treatment costs.