Mode of action and advantages of probiotics

The probiotic concept was founded by Metchnikoff in 1907.  Several definitions of probiotics have been suggested by scientists, but the definition given by Guarner and Schaafsma in 1998 is often used as this is the recommended definition by FAO/WHO: “Live microorganisms which, when administered in adequate amounts, confer a health benefit on the host”.

Probiotics help to prevent disorders in swine caused by gastro-intestinal pathogens and to improve the performance and productivity of pigs. Probiotics do this by exerting their effect through various mechanisms affecting the luminal content of the gastro-intestinal tract and the epithelial surface of the intestines.

Probiotics change the microbial conditions in the gut leading to a more stable and diversified bacterial community with more beneficial and less harmful bacteria. Different probiotics may do this in different ways and to different degrees.The modulation of the ileal microbiota by a probiotic is shown in Figure 1. Canulated pigs were given a diet with and without a Bacillus-based probiotic and the microbiota composition of ileal digesta was studied using qPCR technique. Probiotic administration increased the number of beneficial bacteria like Lactobacillus, Bifidobecterium and Bacteroides-Prevotella-Porphyromonas as well as the butyrate producing Roseburia and Clostridium cluster IV. This illustrates that the microbiota in the small intestine can be modulated in a beneficial direction by a Bacillus-based probiotic. 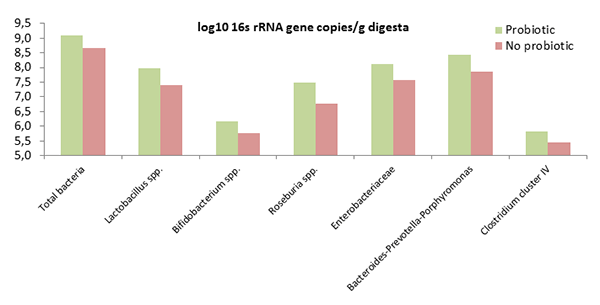 Figure 1. Effect of probiotic* supplementation on ileal microbiota composition in grower pigs.
*: combination of B. licheniformis & B. subtilis


Production of metabolites with antimicrobial properties

Probiotics have been shown to produce antimicrobial substances that inhibit the growth of pathogenic microorganisms in the gut. These substances may be organic acids, bacteriocins-like and hydrogen peroxide. One such example is given in Table 1. Four different probiotic strains belonging to the Bacillus app. were tested for their ability to inhibit the growth of Clostridium perfringens type A using a method similar to the disc diffusion.

Bacteria communicate with each other by secreting signal-molecules, so called auto-inducers. These auto-inducers secreted by one bacterium then affect the behavior of other bacteria. In a similar way there can be a communication between the host animal and the gut microorganisms. This process of bacterial communication is called quorum sensing. Quorum sensing between a lactic acid bacterium (La-5) and a pathogenic E. coli is known to change the pathogenesis of the E. coli so that colonization by the E. coli is prevented.

Modern swine production has reduced the opportunity for “natural” colonization of the gut. Probiotic application is a way to mimic the “natural” colonization in pigs with a developing gut microbiota. Here the probiotic will adhere to adhesion sites on the intestinal epithelial surface. Pathogens like E. coli and Salmonella spp. will thus not be able to adhere to these epithelial sites and therefore their colonization of the intestinal mucosa, leading to diarrhea, will be prevented.

Figure 2: Adrerence of E. coli O147:K89 F4+ to porcine epithelium (type IPEC-J2) after 1 hour of incubation alone or with a probiotic (combination of B. licheniformis & B. subtilis)

Promoting digestion and absorption of nutrients

The promotion of a healthy microbiota will result in an enhancement of the integrity of the gut and an improved histology of the intestines.  As a result, probiotic supplementation can be expected to decrease the epithelial turnover rate and, as a consequence, increase the height of intestinal villi and the villi height:crypt ratio. Furthermore, older epithelial cells contain more vehicles to transport molecules from the lumen to the portal blood than younger epithelial cells. The epithelia will be better at transporting the nutrients into the body of the pig.

Bacteria, especially Bacillus spp., excrete exoenzymes into their environment with the aim of converting the nutrients present in their micro-environment to small molecules that can be transferred into the bacterial cell. This means that they excrete all enzymes needed to convert fibers and proteins into absorbable molecules.

Probiotics may utilize nutrients otherwise used by harmful bacteria. This competition for nutrient has been proposed as a mechanism of action for probiotics. However, the luminal content in pigs is highly nutritious and evidence for this mechanism of action is lacking.

The advantages of the modes of actions described above will, at least to some extent, depend on the age or category of the pigs in question.

For suckling piglets, the stabilizing effect that probiotics have on the development of gut microbiota combined with their promoting effect on the composition of the gut microbiota can have a positive impact on the livability of the young pigs (Table 2).

Table 2. Effect of a probiotic1 supplemented in creep feed on pre-weaning mortality

Utilization of creep feed before weaning can lead to adverse health effects. This can be related to feed ingredient quality and/or early feeding with plant fibers and proteins. Piglets may have difficulties digesting such plant materials due to the fact that the pancreatic enzymes are directed towards degradation of milk dry matter. Utilizing probiotics can be an effective tool to secure optimal protein and fiber degradation and obtain uncompromised fecal consistency as well as improved growth (Table 3).

Table 3. Effect of a probiotic1 supplemented in creep feed on pre-weaning2 performance

After weaning, the lack of feed intake decreases the speed by which digesta pass though the intestines.  This often results in an overgrowth of pathogens in the small intestine causing adverse effects on intestinal integrity and histology which lead to diarrhea and depressed performance. Again, proper probiotic supplementation can counteract this primarily through colonization resistance and support of the digestion of the feed that is ingested. Therefore, the overall productivity of piglets can be enhanced by probiotics (Table 4).

Table 4. Effect of a probiotic1 supplemented to piglets day 1 to 42 post weaning

The advantages of probiotics applied to grower-finishers are two-fold. These pigs are still exposed to enteric pathogens and this can have a dramatic impact on intestinal integrity and functionality. These adverse situations can be prevented or reduced in severity by probiotics that produce metabolites with antimicrobial properties. Furthermore, even though the gut microbiota is fully developed in these pigs, its composition can still be beneficially modulated so that feed utilization and growth are improved.

A probiotic application on a commercial 5500 pen space grower-finisher facility with continuous production over a period of seven months showed an average reduction in number of removals of 42% when compared to a preceding period of seven moths (Figure 4).

Figure 4. Effect of a probiotic* on grower-finisher mortality in a commercial 5500 pen space continuous production unit

* combination of B. licheniformis & B. subtilis

Application of probiotics to sows give advantages somewhat similar to what is being seen in grower-finishers. There is the suppression of enteric pathogenic growth. As for grower-finishers this will enhance the functionality of the gut of the sows, but it will also result in sow feces containing a microbiota with more lactic acid bacteria and less harmful pathogens. This will lead to a more favorable micro-environment in the farrowing pen and a promoting effect on the development of the gut microbiota in suckling piglets. Probiotic supplementation of sow feed can reduce pre-weaning mortality substantially (Table 5).

Table 5. Effect of a probiotic* supplemented in sow feed on pre-weaning mortality.

Furthermore, as for grower-finishers, enhanced feed utilization is also observed. In sows this means that less feed is needed during gestation to maintain a constant optimal body score and that the body weight loss during lactation is reduced. Leaving lactation in an improved body condition has a positive impact on the subsequent reproduction cycle, especially for first parity sows.

Today the advantages of probiotic supplementation in swine are proven through a constantly increasing amount of research and by having a solid scientific base.

BioPlus® is a trademark of Chr. Hansen A/S