The holy grail of sow units is to maximize sow reproductive performance without compromising piglet viability. The industry is taking steps in this direction, with litter sizes of hyperprolific breeds increasing to approximately 18 piglets per litter in Denmark in the last ten years. However, the observed trends also show that litter size has been increasing to the detriment of birth weight and, consequently, weaning weight. In Denmark, for instance, the number of piglets born alive has increased with 2.3 piglets since 2007, while weaning weight has decreased by almost one kilo (Figure 1). Roughly 16 out of 18 piglets are born alive, but the surviving piglets are more fragile and have a higher risk of being exposed to life-threatening circumstances.

The energy requirements of newborn piglets are high, as maintenance of body temperature is extremely demanding. Indeed, the amount of energy required for activities often overwhelms the reserves that piglets are born with. Such energy deficiency becomes even more dramatic with an increasing litter size due to the higher within-litter competition for nutrition and energy from the sow. This often leads to hunger, which is one of the main causes of piglet mortality in the first five days of life. During this suckling phase, piglets entirely rely on sow milk for nutrients, and a weak piglet is not efficient in the intake of colostrum and maximizing its conversion into energy. However, piglet performance during the suckling period can be improved by stimulating the development of the gastrointestinal tract, particularly the establishment of a stable and properly balanced gut microbiota, which will ultimately improve nutrient utilization and decrease mortality. 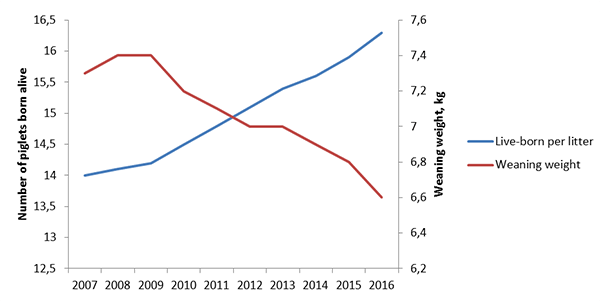 Weaning is a fundamental stage in pig production, with various studies showing that weaning weight is positively associated with later growth performance in the weaner and the finisher unit. Any damaging consequences during the early-life stage of piglets carry over a tremendous impact on nursery and grower-finisher performance, probably because weaning of small and fragile piglets postpones the challenge of ensuring high performance in the subsequent fattening stage. Improving the development of the gut functionality is, therefore, crucial to fully succeed in exploiting the growth potential of piglets in early life.

The untapped growth potential of piglets

The suckling period is short but critical. Seven to ten days after farrowing, the milk production becomes limiting to the piglets. Even though the piglets have an enormous growth potential during this stage, it is restricted by both the yield and the composition of the milk.

Nutrient supplementation through creep feed is among the most successful strategies to improve the piglet’s survival, condition, and growth performance. However, research has traditionally shown that suckling piglets have a very low intake of creep feed during this phase, and only start consuming feed in significant amounts after three weeks of age. Although, offering creep feed is a practice that has mainly been done to enhance post-weaning performance, this strategy can be better exploited to improve the growth potential of suckling piglets.

Suckling piglets digest the nutrients in sow’s milk very efficiently, but their digestive system is still too immature to take full advantage of creep feed. Suckling piglet’s digestive system is only capable of breaking down a limited fraction of feed ingredients because their pancreatic enzymes at this life phase are naturally designed to process nutrients from sow milk. For instance, the enzyme trypsin, which digests proteins, is present in considerably low levels at birth, and remains constantly low during the entire suckling period (Figure 2). Lipase is also a digestive enzyme that helps to process dietary lipids. Although its activity level is higher than trypsin before weaning because it is needed to process milk fat, lipase levels notably increase after weaning. This notable variation in the activity of digestive enzymes early in life illustrates that piglets are only able to partially digest ingredients other than sow milk. This might have dramatic performance and health consequences, as undigested nutrients in the intestines can promote bacterial growth and osmotic changes that often result in diarrhea. Moreover, this can lead to anorexia and a more susceptible gut to harmful pathogenic diseases, and will ultimately have negative carry-over effects for the remaining grow-out period. 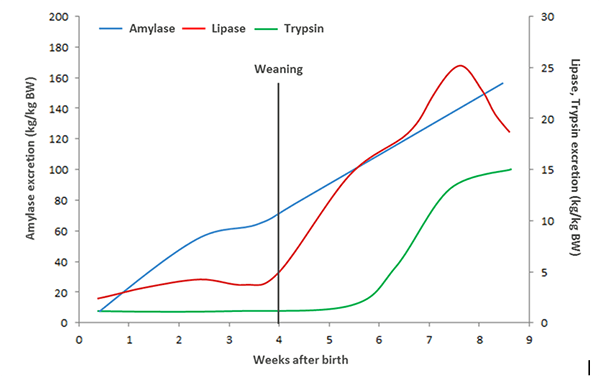 Figure 2: Excretion of the digestive enzymes amylase, trypsin, and lipase, during the first eight weeks of piglet life (Modified from Cranwell, 1995).

However, recent findings have shown that supplementing piglets at an early stage with creep feed can be beneficial, especially in large litters. Creep feed can enhance growth performance and reduce piglet mortality during the suckling period. Ultimately, the use of creep feed before weaning is expected to facilitate the transition at weaning from milk to solid feed by making the digestive system adapt to a feed source other than sow milk, which will better equip piglets to digest the feed given after weaning.

The use of creep feed also benefits the sow. There is compelling evidence that providing creep feed to piglets improves the sow’s body condition through a reduction in piglet dependence on sow’s milk. Moreover, piglets with a longer reliance on sow’s milk will negatively affect the sow’s condition after the lactation period, requiring a longer period to fully recover before she can become pregnant again.

Although these findings encourage the use of creep feed to fully take advantage of the growth potential of piglets, it is important to note that its utilization before weaning can also lead to adverse health effects. In particular, disturbing the natural balance and development of gut microbiota can eventually lead to a lower enzyme activity and gastric capacity for secreting acids during the suckling period, weakening the resistance capacity against infectious diseases. Although the enzymatic activity remarkably increases after weaning (Figure 2), other challenges arise. For instance, a decrease in feed intake and absorption speed in the small intestine is often observed, which can result in an overgrowth of pathogens that, again, can lead to diarrhoea and decreased piglet performance.

It is clear that piglets’ early life, from farrowing to weaning, presents important challenges that have great impact for later production stages if unsuccessfully addressed. Feed supplementation through creep feeding is a promising strategy, but it is of upmost importance to guarantee that gut microbiota properly develops to this new source of nutrients. Feed additives can help overcome nutritional and health challenges during piglets’ early life. Particularly, probiotics can contribute to increase performance through an optimal nutrient degradation and a healthy intestinal tract with a stable population of beneficial bacteria.

Promotion of piglet performance and livability during piglet early life

Probiotics are live microorganisms that improve the health of the host animal when administered in adequate amounts. When provided to pigs, probiotics usually help to prevent disorders caused by gastro-intestinal pathogens, thereby improving performance and productivity. Even though there are approximately 400 different species of microorganisms in the gut microbiota of a 4 week old pig, some of which are beneficial and others pathogenic, a more stable and diversified gut microbiota with a lower fraction of harmful bacteria can be achieved by probiotic supplementation. Beneficial bacteria in pig microbiota are extremely important because they excrete exoenzymes into their environment, which are biological catalyzers that convert nutrients, such as sugars and proteins, into smaller molecules that can be easily absorbed by the host animal.

Supplementation of probiotics as an alternative to antibiotics is one of the most promising approaches to improve animal health and production. Probiotics has rapidly been accepted as an alternative to antibiotics due to their ‘friendly bacteria’ status, and the general public welcomed their use in sustainable pig production strategies. Probiotics intensify the resistance against pathogenic bacteria that can harm the natural balance of gut microbiota, while simultaneously enhancing digestive processes and stimulating the immune system of the gastrointestinal tract. Specifically, probiotic bacteria inhibit the adhesion of pathogenic microbes to the intestinal epithelial surface in the pig gut while simultaneously producing antimicrobial metabolites that hinder the growth of pathogens. This decreases the load of pathogenic bacteria, such as Escherichia coli that has an opportunistic life-strategy featuring high growth-rates and rapid utilization of nutrients available in the gut environment. By increasing enzyme activity and improving nutrient digestion, probiotics limit the amount of undigested nutrients and concomitantly decrease the risk of pathogen growth.

Several microbial species have been used as probiotics in pig production, namely Enterococci faecium, Bacillus spp., Lactobacillus spp., Saccharomyces cerevisiae, Bifidobacterium bifidum, among others. Probiotics containing naturally-occurring strains of Bacillus subtilis and Bacillus licheniformis are particularly interesting because they increase enzyme activity of both lipase and trypsin in the small intestine of piglets (Figure 3). This improves nutrient absorption and feed conversion, and ensures optimal weaning weight at the end of the suckling period.

Figure 3: Lipase and Trypsin activity in vivo in the small intestine of piglets supplemented with probiotics (green rhombus)* and non-supplemented piglets (red dots) (*a combination of B. subtilis and B. licheniformis).

Several studies have shown that supplementation of probiotics with creep feed significantly increases feed intake of suckling piglets. Figure 4 shows that suckling piglets supplemented with a probiotic have a significantly higher growth performance compared to a control group. This result is based on a meta-analysis including a total of 2200 suckling piglets from 179 litters that were given creep feed, half of which were supplemented with a Bacillus spp. based probiotic. Another study has revealed that suckling piglets fed a dietary supplement with a Bacillus spp. based probiotic via creep feed showed reduced pre-weaning mortality by more than 50% (Figure 5), which results in one more pig weaned per litter, thereby proving to be a valuable ingredient to improve the performance of sow units. 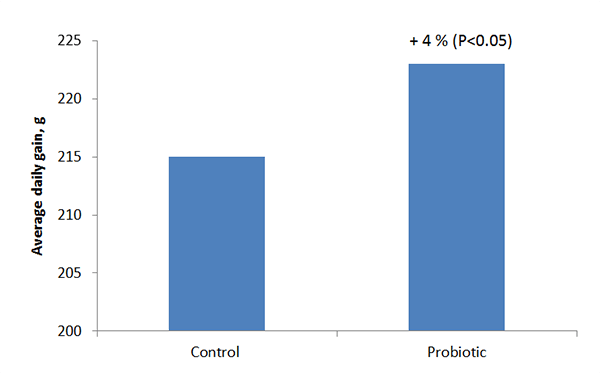 Figure 4: Average daily gain of suckling piglets supplemented with a probiotic* in creep feed versus a control diet without probiotic additive (meta-analysis based on 12 different trials) (*a combination of B. subtilis and B. licheniformis). 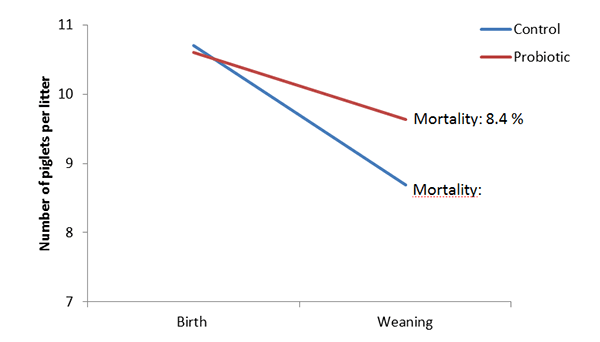 It is acknowledged that probiotics improve pig productivity and health, stabilize the gastrointestinal flora, reduce piglet diarrhoea, increase nutrient availability and their absorption rates, and maximize pig growth rates from birth to finishing. This is particularly observed for Bacillus-based probiotics supplemented in feed, which result in robust piglets at weaning. Clear benefits arise from investing in early life piglet nutrition to produce healthy and robust weaned piglets, guarantee its future performance, and increase the revenue in the long run.
A great deal of work has been broadly conducted on the efficacy of probiotics improving the growth and health of suckling piglets. However, there is also increasing evidence that supplementing probiotics to suckling piglets minimizes the consequences of post-weaning stress, particularly diarrhea and poor growth performance, which often cause severe economic losses to pig producers. Thus, as piglets’ early life experiences notably influence their subsequent performance, focus on early-life piglet performance is critical for success.

BioPlus® is a trademark of Chr. Hansen A/S