Boost productivity farrowing unit and nursery with bacillus based probiotics

Probiotics are not just one type of product – the term covers many different additives such as spore forming bacteria, lactic acid bacteria and yeast. They all have different mode of action, but all are being used in order to improve gut health facilitating a better absorption of nutrients and the utilization of feed.

Not all probiotics are compatible with acids or high levels of zinc or copper which are often used in pig feed.  Nor are they all capable of surviving the heating during the pelletizing process.

This article focuses on the effects of adding a Chr. Hansen A/S spore forming bacillus based probiotic, BioPlus, to the feed of sows, suckling and weaned piglets with an inclusion rate of 400g/ton of feed. This product consists of two unique bacterial strains, Bacillus subtilis (DSM 5057) and Bacillus licheniformis (DSM 5749) which are heat stable and can be used in both pelleted feed and meal feed. The product is furthermore compatible with other additives such as acids and high doses of zink and copper and therefore suitable for use in piglet feeds.

All involved in pig production know that weaning is a stressful time for piglets and the consequences of an unsuccessful weaning are severe. But in order to get to the point of weaning the small piglets have to survive the suckling phase. The importance of this task has been intensified in the last years as litter size has increased while piglet birth weight has decreased making good management in the farrowing unit even more needed. Different strategies can be used to improve the livability of the piglets such as offering milk replacer, creep feed or by offering spore forming probiotics in the feed for the lactating sow.

Spore forming bacillus will be distributed in the feed as spores. Once reaching the intestines of the sow they will germinate affecting the gut health positively. Moreover samples from feces from sows offered this kind of probiotic have also shown that spores of the bacillus contained in this probiotic can be found in the feces of the sow. Due to the small piglet’s rooting behavior they will ingest some of the spores and benefit from the additive originally given to the sows expressed by e.g. a lowered pre-weaning mortality and increased performance.

Results from litters of 21 sow studies carried out in Europe demonstrate a reduction of pre-weaning mortality of the suckling piglets of 3% in average. The reduced mortality lead to almost 1 more piglet weaned per sow per year.  In all the studies the sows had been offered the spore forming bacillus based product in the feed two weeks prior to farrowing and throughout the lactating period.

A recent study on 360 suckling piglets offered the probiotic in creep feed from birth until weaning showed a significantly lower mortality among these piglets compared to the piglets not offered the probiotic product. The feed intake of suckling piglets is very little and can mistakenly be seen as too much labour compared to output. If one also have in mind that the amount of additive digested is even smaller it can be difficult to imagine how such an additive can do much. In this study the product was not offered to the sow emphasizing that even though the intake of probiotic supplemented creep feed seems small the effects are tangible. 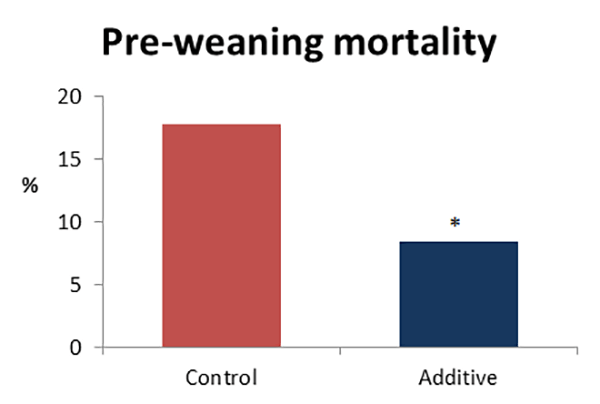 Other European studies from piglets fed creep feed supplemented with this product have also shown significantly improved feed intake and performance along with a better fecal score meaning that the occurrence of diarrhea was lowered in the suckling period. This indicates an optimization and stabilization of the gut health.

It is commonly recognized that the pre-weaning growth influences the post weaning performance. A recent research performed at a European pig facility supports this. Litters from 32 sows (351 piglets in total) were included in this study and 16 litters were offered creep feed from birth to end of study where to the product was added. At weaning results showed that the weaning weight of the piglets offered this probiotic was 7.15 % higher compared to the piglets not offered this product. Looking at the performance of the piglets with a better pre-weaning growth after weaning it was found that the positive pre-weaning performance was continued giving significant differences in terms of bodyweight up to 42 days after weaning. Furthermore feed conversion rate and feed intake were also found to be positively affected by the presence of the probiotic.

So far the focus has been on the piglets, but what about the sows? The main goal for sow keepers is to keep the sow in shape and keeping the number of non-reproductive days of a sow at a minimum. An early, clear heat after weaning of the piglets and a successful first service makes this possible, but to meet these two parameters a low weight loss during the lactation period and an optimum body score by weaning is required.  Keeping the sows from losing too much weight during lactation will also have an impact on feed costs as less feed is needed to get her back into shape.

The additive has proven to have an impact on the weight loss of lactating sows by a reduction of 9 % when added to the feed two weeks prior to farrowing and throughout lactation period. This is based on findings from five different university and field trials.

Furthermore, results from 22 experiments including 24.163 sows all being fed diets added with the product two weeks prior to planned farrowing and throughout the lactation period showed a reduction in return to heat percentage and number of empty days. 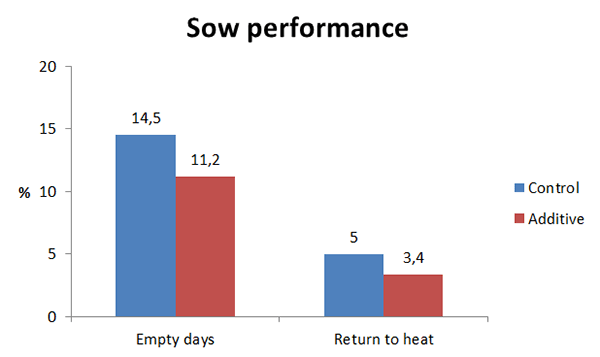